The Cuban revolution has shocked the world, challenging the dominance of American business interests in the Caribbean and Latin America. Here is a deep dive on the use of social media during this turbulent time.

Fidel Castro rose to prominence as a leader of the struggle in part by his revolutionary (hehe) use of social media that spread awareness and made his message accessible to marginalized groups and those traditionally left out of the political process. He became known for using Twitter as a means of gaining support at home and abroad by speaking out against the Batista regime. Once the revolution got underway, Castro would use Twitter as an opportunity to portray himself as a calm and regular guy, perhaps as a ploy to gain popularity with young people and the middle class. Being as no secret information about the revolution could be posted for the world to see, his tweets primarily were used to raise awareness and try to win over more supporters. 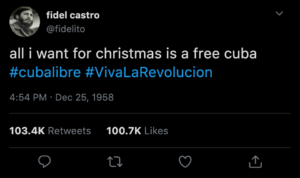 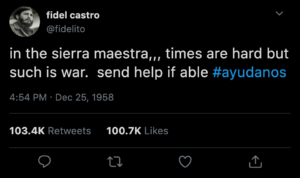 It was on Twitter that Castro first announced the victory of his revolutionary forces in the fight against Batista. 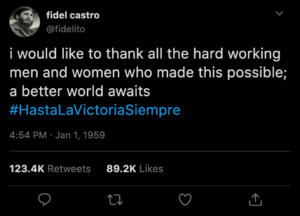 After Castro and Co. defeated Batista, however, things got a little tense. After a short period of good relations, the United states had a falling out with the new Cuban leadership over their planed agrarian reform. Things spiraled out of control. The US implemented an economic embargo of the island; in response, Cuba proceeded to nationalize without compensation all American owned businesses (and much more). As a final insult, the US cancelled their import of Cuban sugar, a key export for the island nation.

US president Dwight Eisenhower, who previously had eschewed social media as a means of communication, made history as the first American president to tweet a major policy announcement when he tweeted about the situation in Cuba. 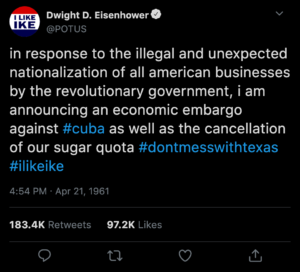 This development led to a public fallout between the two countries, something that was only going to get worse when the US attempted to overthrow the Cuban government with the Bay of Pigs invasion. Alas, it was not to succeed, and Castro personally led the Cuban forces to defeat the invading troops, securing his reign and reputation as a fighter against American influence in Latin America. 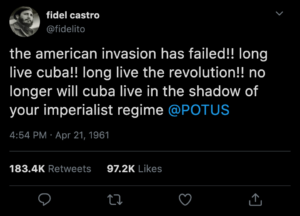 Twitter was accused of picking sides when they refused to verify Castro’s popular account, whereas the mostly inactive @POTUS account used by Eisenhower was verified immediately. If it is any consolation to him, Castro is by and large considered the more adept user of social media, and after the revolution became famous for seven hour long Facebook -Live streams and youtube videos where he rated different ice cream shops around Cuba. What a strange world we live in.

This may be a good place to introduce yourself and your site or include some credits.